It directs the team of threads to work on each iteration of the for loop. The number of elements in the vector is equal to the number of open files. The file is created if it does not exist, otherwise it is truncated. The order of arguments is different, and the arguments are oriented towards writing to a Verilog memory instead of a C character string.

This function will return true if file has been open for reading. 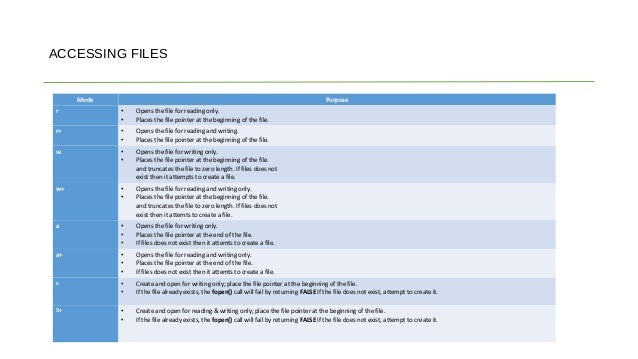 This works but it has one little problem that you'll only notice at runtime. If there is no EOF, you must use an intervening call to a file positioning function. Note that negative numbers are NOT supported because of a Verilog language limitation.

This creates new string objects for each and every unique integer or numeric which takes compute cycles to create and hits the global character cache a hash table and uses more RAM.

An ideal 4x improvement: Writing Data to a File To understand how can we write data to a file, consider Example1. Instead you want that whatever you write should be appended at the end of the existing file without creating a new file with the same name.

So if iteration 7 finishes quickly for some reason, that thread will wait for iterations to finish before it writes its buffer and receives the next piece to work on. The only tricky aspect is ensuring that each piece is written to the output csv file in the correct order.

So I added my own in-memory buffer, writing to it directly and moved from fprintf to the lower level C functions write. Having anticipated these problems, is there a better way I could implement from the get go.

The file positioning functions are fsetpos, fseek, and rewind. Opening a file in append mode a as the first character of mode causes all subsequent write operations to this stream to occur at end-of-file, as if preceded the call: For the same reason, the Unicode stream-output functions convert wide characters to multibyte characters as if by a call to the wctomb function.

Instead we simply passed the path and file name in the constructor of the IFileObject. However, when you switch from reading to writing, the input operation must encounter an EOF marker. Here is the result on my 4-core MacBook Pro running bare-metal Ubuntu, of course: This was one of those rare moments where the speedup factor was the best I hoped for.

The FILE Structure The FILE structure is the basic data type used when handling files with the standard C library. When we open a file, we get a pointer to such a structure, that we later use with all other operations on the file, until we close it.

The fopen, fwrite, fprint, fread, and fclose commands let you work with files. Opening a file Before you can read from or write to a file, you need to open the file using the fopen function.

fopen takes two string arguments: A string containing a filename. An optional mode string indicating whether you want to open the file to read (“r”), write (“w”), or append (“a”). If handle was fopen() ed in append mode, fwrite() s are atomic (unless the size of string exceeds the filesystem's block size, on some platforms, and as long as the file is on a local filesystem).

That is, there is no need to flock() a resource before calling fwrite() ; all of the data will be written without interruption. fwrite(fileID,A) write the elements of array A as 8-bit unsigned integers to a binary file in column order.

The binary file is indicated by the file identifier, fileID. Use. Opening a file with append mode (a as the first character in the mode argument) shall cause all subsequent writes to the file to be forced to the then current.